Background on the Politics of AIDS

HIV/AIDS AND THE RIGHT-WING REPUBLICAN AGENDA

The first AIDS cases became a national epidemic in 1981. Those infected with the disease were all gay men. At the time, the President was Ronald Reagan, who was a part of the religious and conservative right-wing party. He associated himself with people like Rev. Jerry Falwall, who once said, “AIDS is the wrath of God upon homosexuals.” Reagan’s communications director Pat Buchanan stated that AIDS was “nature’s revenge on gay men.” President Reagan and his administration remained silent on the subject of AIDS while thousands were either dying or already dead.

The Democratic Party noticed that there was a problem and also noticed that the administration was ignoring it, so in 1984 they held the Democratic National Convention in San Francisco. This was done in the hopes that it would focus attention on AIDS research, education, and treatment. President Reagan did not publicly address AIDS until May 31, 1987. By the time he began to take action, 36,058 Americans had AIDS and over 20,000 in America were already dead. Doctor C. Everett Koop, Reagan’s Surgeon General, stated the lack of action was for the following reason: that “because transmission of AIDS was understood to be primarily in the homosexual population and in those who abused intravenous drugs, they (the administration) took the stand that they (AIDS patients) are only getting what they justly deserve.”

If this is what he truly believed, why in 1987 would President Reagan begin to take action? In 1987, news began to spread that heterosexuals (in particular, heterosexual white men) could also contract AIDS. When this was determined, Surgeon General Koop called it “the biggest threat to health this nation has ever faced.”

President H.W. Bush also did little to ramp up AIDS education and medicine during his four years in the White House. In 1995, under President Clinton, the Presidential Advisory Council on HIV/AIDS was created. This was a major step. Following President Clinton, President George Bush started PEPFAR (Presidents Emergency Plan for AIDS Relief). This plan saved thousands of lives, not just in the U.S., but across Africa. President Obama maintained both programs throughout his presidency, and, under his term, a medicine called PREP (Truvada) was approved by the FDA. This drug prevents the spread of HIV from HIV-positive patients to HIV-negative ones.

Now We Have Donald Trump and Mike Pence

Forty percent of people living with HIV rely on Medicaid. In May of 2017, with the basic function of health care dangling by a string, Trump was seen doing a victory lap at the White House. The very day of Trump’s inauguration, the White House’s policy on AIDS was removed from the website. To this date, there is STILL no head of the HIV/AIDS council and all six members resigned, which means the ENTIRE AIDS COUNCIL is vacant. Where there used to be a blank AIDS Council page at the following link, there is now nothing at all: https://www.whitehouse.gov/onap. In fact, there isn’t a single page on www.whitehouse.gov that mentions AIDS or HIV and how they plan to help the citizens who are affected. Because they don’t plan to help.

People with HIV/AIDS today are gay men, people of color, and the poor. This is why the Trump administration, and the Republican Party at large, doesn’t want to fix it. The Republican Party benefits from the catastrophic effects of AIDS. It reminds their base that queers are getting their just dues. It also reminds their base that colored people are unimportant. If this seems like political rhetoric to you, I kindly ask you to remember the attempts to repeal the ACA. Initially, Republicans were immediately ready to remove it, until they found out that the majority of people who benefited from the ACA were white Americans. After that was determined, the fight dragged on.

The Republican agenda is to disenfranchise marginalized people in whatever way they can. The war on drugs, the war on women, and, yes, even the complete silence and indifference on HIV/AIDS is enacted to cripple marginalized communities. In 2016, 10,223 black men; 7,425 Latino men; and 4,189 black heterosexual women who have had sex with men were diagnosed with HIV. All three of these groups are overwhelmingly Democratic. The Republican Agenda is to win, at all costs, even at the expense of the lives of American citizens.

At this time in the 1980's & 90's many people who died of AIDS-related causes did not receive funerals, due to both the social stigma of AIDS felt by surviving family members and the outright refusal by many funeral homes and cemeteries to handle the deceased's remains. Lacking a memorial service or grave site, The Quilt was often the only opportunity survivors had to remember and celebrate their loved ones' lives. The first showing of The Quilt was 1987 on the National Mall in Washington, DC. The Quilt was last displayed in full on the Mall in Washington, D.C., in 1996, a display that included a visit by President Bill Clinton and first lady Hillary Rodham Clinton, but it returned in July 2012 to coincide with the start of the XIX International AIDS Conference, 2012. 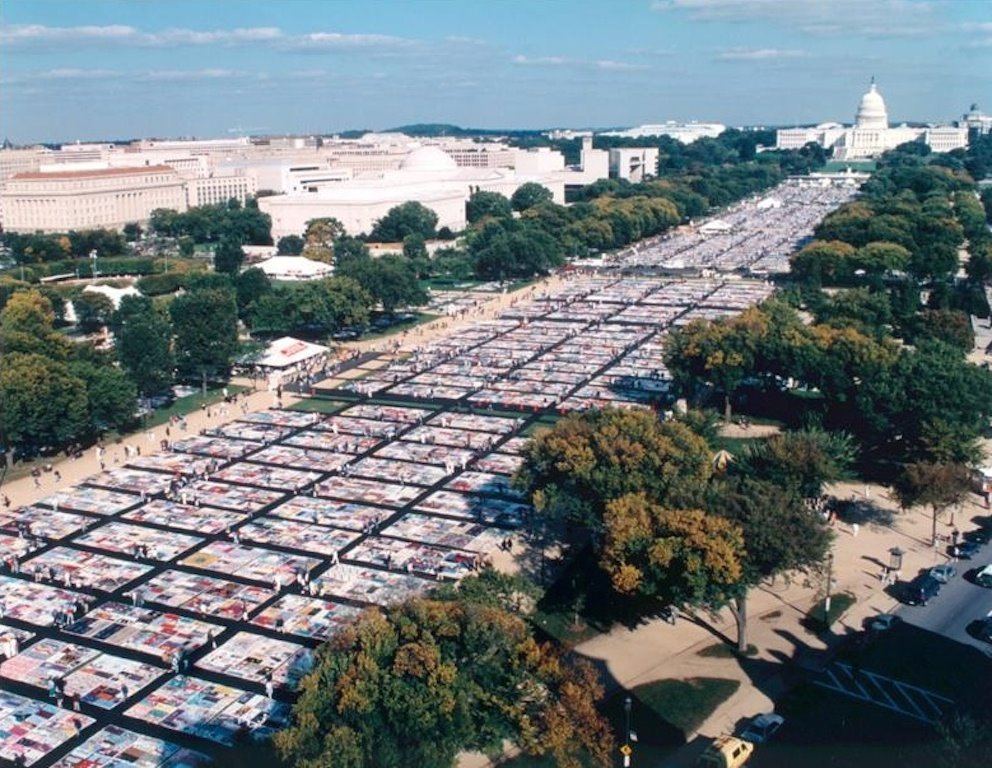 Oops, you forgot something.

The words you entered did not match the given text. Please try again.

You need a strong desire and faith
by Michael | 85 comments